I have been planning weddings for years. One of the most common tasks I am assigned is to explain the meaning of the traditional Vietnamese ceremonies to grooms and their friends. In most of the case, they know what it is. Still, understanding what lies underneath is a bit trickier and somehow un-relatable to Western culture.
Since there are plenty of useful articles on the Internet, I will only list down the most common questions that I was asked by the grooms…So, let’s take a cup of tea and dive in with me. 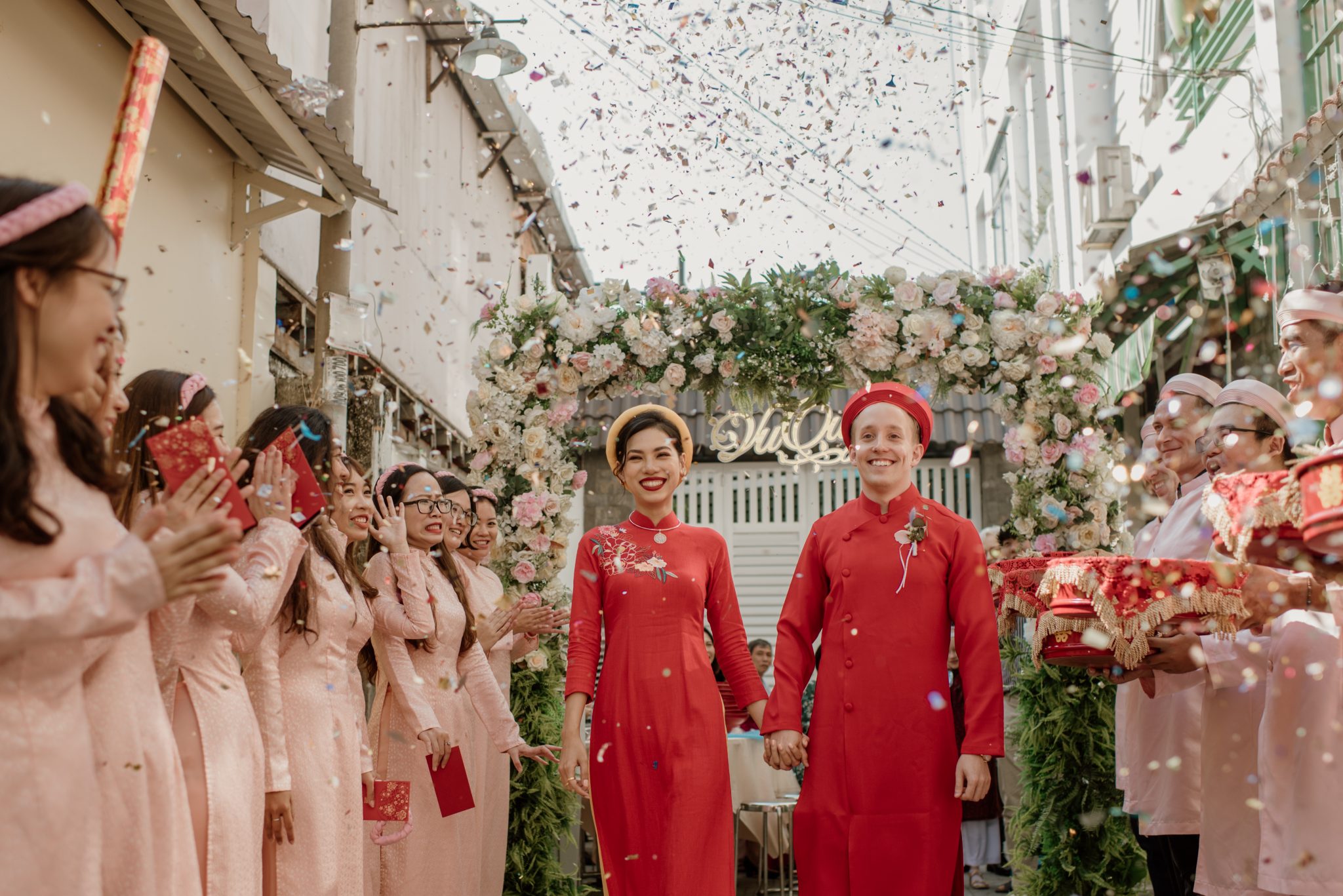 1. Ok, I know Vietnam is full of traditions, but can you tell me…again, what are these “traditional Vietnamese weddings”? do they have the same meaning as our western weddings?

A standard traditional Vietnamese wedding will consist of (at least) 5 ceremonies, including:

They are all rooted in the past when Tinder would be considered a shameful service, couples are not allowed to hang out freely, and parents speak on your behalf (for almost everything). Leave aside the well-known arranged marriage, let’s say you crush a girl in a neighboring village. Fortunately, your paddy fields are next to each other, so you can occasionally bump into her for random talk. Your feelings grow over time, so you want to ask her out after work. Let’s say, for dinner. 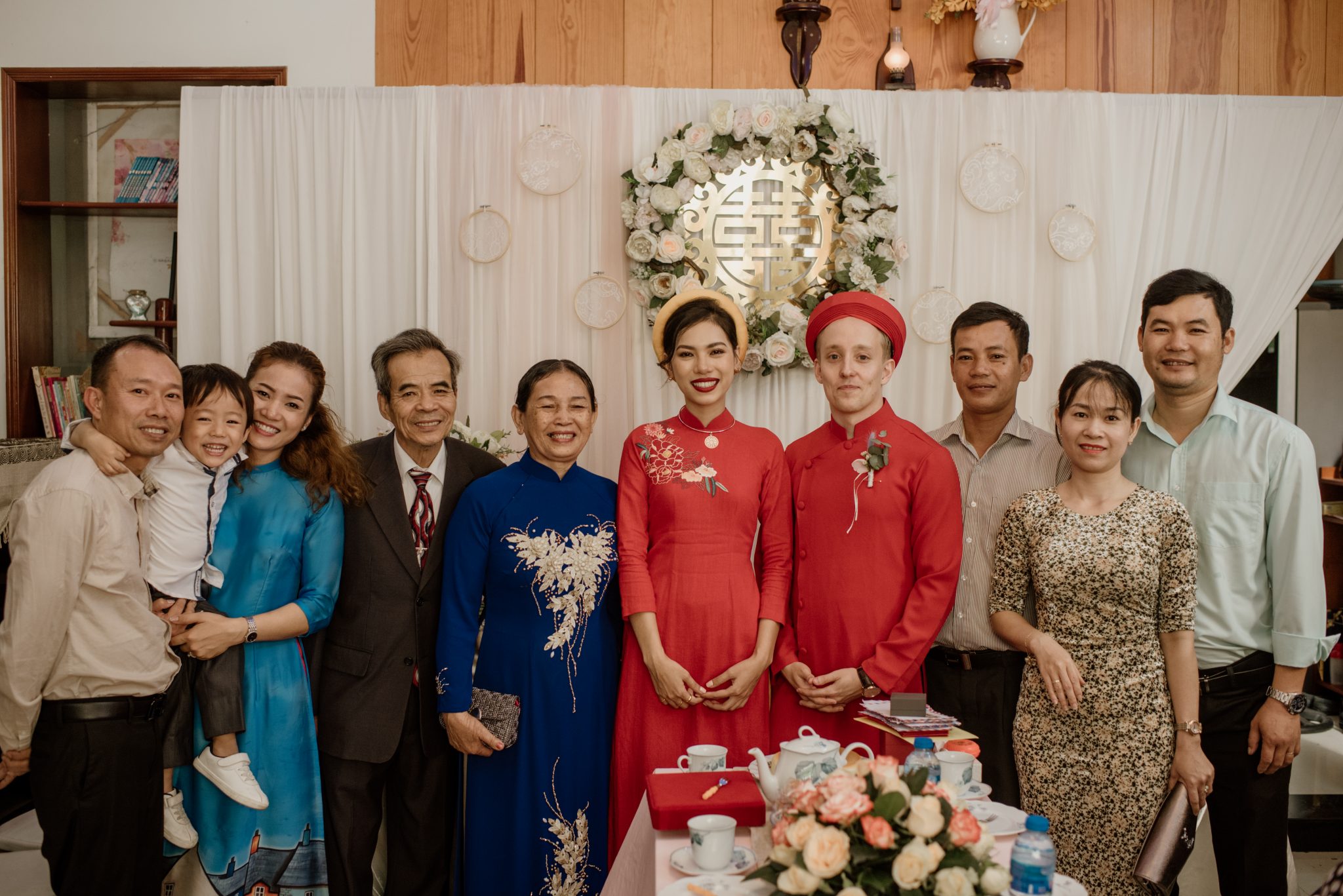 In the past, boys and girls aren’t allowed to hang out without the permission of their parents. To date with somebody, your parents have to ask her parents for their approval (in person). That meeting is called “Dam Ngo”. It is also the least formal ceremony, among the others.

You are not engaged yet, but all requirements and gifts of the engagement will be discussed beforehand. To most families, marriage is viewed as a farewell to their daughter. That’s why they will ask for many conditions so that you are proved to be worthy. If her parents like your parents (I’m sorry, you are not the decision-makers) and all terms are agreed, you guys will be allowed to hang out.

If you love her and decide to propose, “Dam Hoi” will happen soon after. It is a small & formal meeting in which your family asks the bride’s family for marriage. All agreed wedding gifts are brought to the bride’s house, and you are officially engaged after this ceremony. Your wedding date is also decided during this ceremony.

On your wedding date, your family revisits the bride’s house to bring your fiance home. That ceremony is called “Ruoc dau.” At the same time, your house will be nicely decorated to welcome the new bride, it is named “Don dau.” Only after the Don dau ceremony, you are considered a married couple. Since you guys live in different villages, there are two separate wedding receptions called in each village. The one in your village named “Thanh Hon” while the other named “Vu Quy” Though most of the Vietnamese traditions were heavily influenced by the Western lifestyle, these traditions remain in practice and are called “morning ceremonies.”

Usually, you are invited to the wedding reception as other ceremonies are kept privately among family members and close friends. 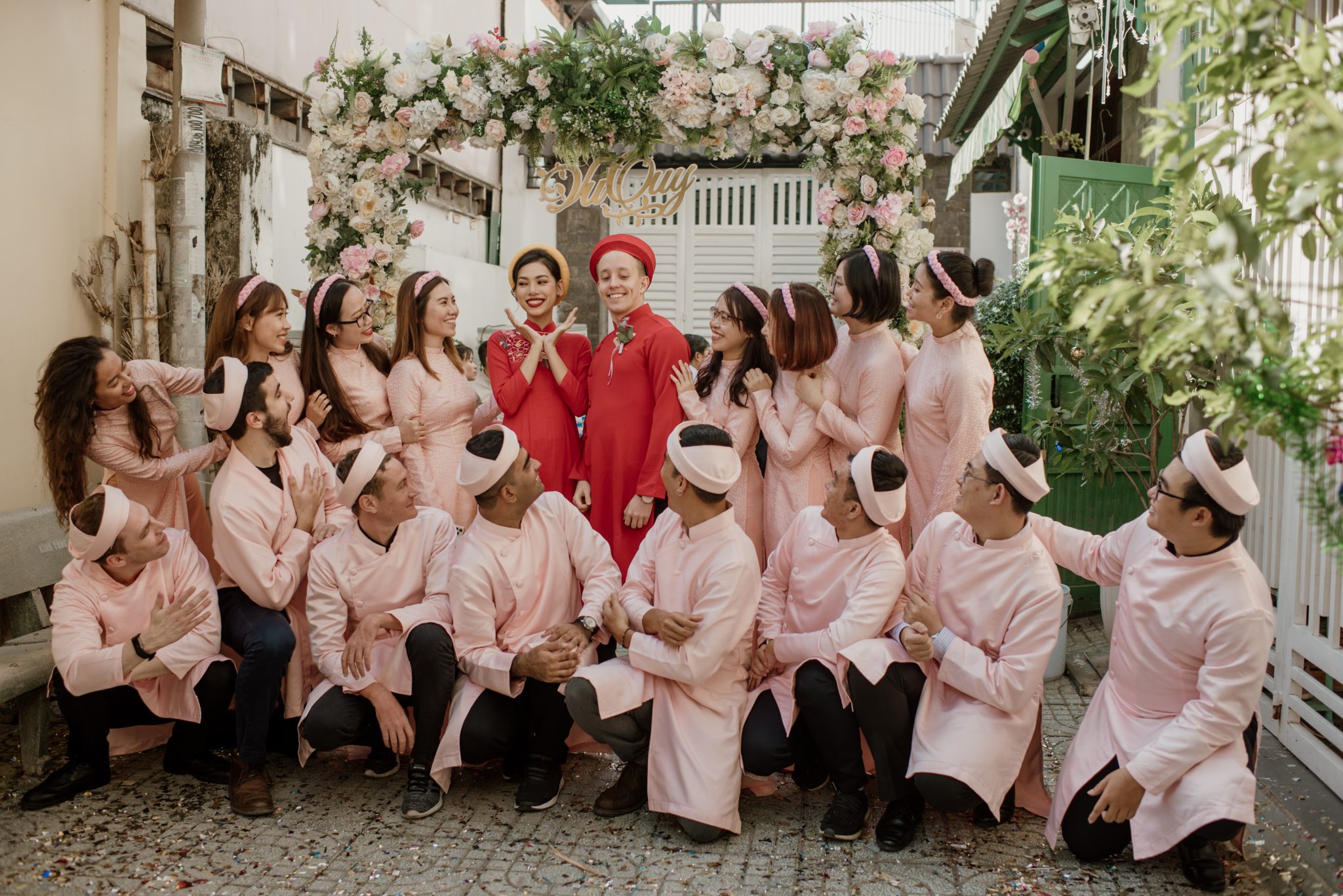 2. I live in Saigon, and we only have 1 wedding day. Why do my friends in Hanoi have 3, sometimes 5 days in a row?

If you stay in Vietnam long enough, I guess you have already had the answer. Southern people are more flexible and prefer convenience to customs. As dating and marriage are no longer decided by parents (and you are not Vietnamese), most families will simply skip “Dam Ngo”. They combine “Dam Hoi” with Ruoc Dau & Don Dau. Some families even skip the Don dau if you don’t own a house. Therefore, your girlfriend will be engaged, move out, and move in with you in just one morning. Lucky you, that is a hella big simplification, man.

On the contrary, Northern people are a bit more old-fashioned. A wedding is significant and needs to be carried formally. Hence, skipping any of the above customs is sometimes considered superficial. This question is tricky. I know they sound complicated but as a Vietnamese, I would say it is a big “YES”. Those ceremonies emphasize the bride’s family. These traditional customs are meant to pay respect to her parents and other family members, who spent an enormous time (and money) to raise up your fiancé. It is as formal as the church or vow ceremony in Western culture.

4. I see, so they are essential. My in-laws seem to be serious about these ceremonies. Should I be worry?

No, not at all. Your in-laws are serious because they don’t know how to treat your family well, who have to fly in for the wedding. Tell them more about your family so that they are more comfortable on the wedding date.

5. OK, compared to the dinner reception, which one is more important? I see there is a ceremony on the stage as well.

To the bride’s parents, a wedding reception is definitely less critical than morning ceremonies, because it is meant for eating and having fun. The evening ceremony is just merely an announcement to all of your friends. Therefore, it is your playground to personalize the program and apply (almost) any idea you have.

6. Is there any difference between a Buddhist or Catholic wedding in Vietnam?

There is no difference between Buddhist or Catholic wedding except that Catholic brides have one more ceremony in churches….that makes six events in-a-row

7. When exactly are we officially considered married? After the ring exchange or after I kiss the bride?

You are considered married after exchanging the ring during Don Dau. The representative of the bride’s family will act as a celebrant to announce you, husband and wife, soon after that. You may kiss the bride (if it is appropriate).

8. I see people bring many (sometimes expensive) offerings, it is a legally accepted Brideprice?

In the past, brides are prohibited from returning to their house. This means her family loses good labor, so it is your responsibility to support her family with the wedding expenses. Nowadays, offerings are no more than traditions, which represent your appreciation to the bride’s family. Gifts don’t need to be expensive, but they should be well-prepared and decorated nicely to show how thoughtful you are.

9. Do people get offense if my offerings are cheap? And what is considered “cheap”?

Unless you are getting married to a wealthy bride, most offerings are readily accepted. You should pay attention to the jewelry that your parents give to the bride. Leave this part to your fiance, she knows what to do.

If you like this article, leave us some comments on our Facebook fanpage or Instagram. The photos in the blog are from Fia & Pontus‘s wedding – A wedding by Meraki wedding planner. Captured by MOVE Studio